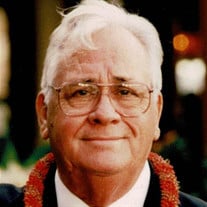 Alfredo Saucedo was born on November 16, 1935 in Chihuahua, Mexico and passed away on March 19, 2019 in Riverside, California. He was the sixth of seven children born to Carlos and Enriqueta Saucedo. As a young man he always enjoyed working on cars at his friends workshop, driving around town, camping and ﬁshing with his family. He met his future wife Maria De La Luz on a blind date that was to be his destiny. They were married on June 18th, 1957 in Las Cruces, New Mexico and they began their new life in El Paso Texas then to Los Angeles, California where they would have ﬁve children Alfred, Alex, Lucy, Patricia and George. While raising and providing for his family he worked several diﬀerent jobs as a painter, waiter and a chauﬀeur. He started his long career in the electrical trade working for Andrews Electrical in Los Angeles, California then Amfac Electrical Supply and then retiring from Consolidated Electrical Distributors. He worked in various positions throughout his career such as a warehouse manager and he was recognized as an outstanding and dedicated employee and happy that he never missed a day of work at his former two employers. In the early years of his marriage he enjoyed taking his new bride out dancing to live big band music Laurence Welk. As his family began to grow he bought his ﬁrst home in El Monte, California then West Covina, California where he would have many memories and accomplishments with his wife and children. He had great joy spending time during the holidays with all his children and watching them grow up through the years. He was also known to be quite spontaneous even taking road trips at the last minute. One of his favorite pastimes was ﬁshing and he was very happy when he purchased his new boat taking it out to sea and fresh water lakes regularly. He was a great fan of sports and enjoyed going to see his children’s games. One of his favorite phrases was “Nothing but the best”. His character was kind hearted, honest, joyful and gentle. He was known to be whistling when he was happy and you’d hear him whistling early in the morning like the birds of the air. He spent the later years of his retirement in West Covina and Menifee California with his loving wife Maria De La Luz enjoying what he loved the most his family. He will be missed but we know that he is resting with the angels. God bless you Dad! He leaves behind his wife Maria De La Luz; Children: Alfred, Alexander, Lucy, Patricia and George; Grandchildren: Desseri, Vanessa, Mark, Raymond, Jennifer, Felicia, Brandon and Cheryn; Great Grandchildren: Maliya, Rickie, Angelina, Maili, Annabelle, Valora; Daughters in law: Carol, Gloria, Satsuki, Betty; Son in law: Glenn; Grand Daughter in law: Cynthia.

Alfredo Saucedo was born on November 16, 1935 in Chihuahua, Mexico and passed away on March 19, 2019 in Riverside, California. He was the sixth of seven children born to Carlos and Enriqueta Saucedo. As a young man he always enjoyed working... View Obituary & Service Information

The family of Alfredo Saucedo created this Life Tributes page to make it easy to share your memories.

Send flowers to the Saucedo family.