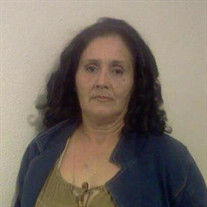 Clara Maestas at the age of 62 went home to be with Lord on January 30, 2016 in San Bernardino, California surrounded by her Love Ones. Clara Brito Garcia was born July 12, 1953 in Oxnard, California to the late Cruz Garcia Sr and Pilar Brito Garcia. Clara was 7th Born in the family of 8 brothers and sisters. Clara moved to San Bernardino, CA in the early 80's. Clara was a homemaker for over 40 years she enjoyed going to the casino and recycling everything there is an old saying " one man's trash is another man's treasure" and this was clearly Clara by far. Clara loved spending time with her family, laughing, cracking jokes, and was always happy. 1967 Clara met her first Husband the late Armando "Pachi" Altamirano and 8 children were born from this union. In June of 1990 Clara got together with Benjamin Ligonio Maestas who she married on July 6, 1996 in Las Vegas, Nevada at The Graceland Chapel. She remained married to Benjamin until she passed away January 30, 2016. Clara and Ben been together for 25 years and June of this year would of made it 26 years and they were married for 19 years and July of this year would of made it 20 years. Clara Maestas Beloved Wife, Mother, Grandmother, Great Grandmother, Sister, Aunt, Cousin and Friend. Clara is survived by her loving husband Benjamin Maestas of 19 years and Her three Sons: Randy (Lorraine), Armando Altamirano and Hector Arias, and her four Daughters: Frances's (Danny), Lisa (Edgar), Rachel, and Angie (Isaac) Altamirano. Grandchildren: Amber, Armando Jr., Desirae, Kasmira, Raylinea, Cynthia, Veronica (Anahi) Mario, Albert, Anaie, Jose, Joseph, Virgina, Jesus, Edgar, Jacinto, Genaro, Nicholas, Michael, Angelina, Adrian, Unique, Damian, Iseah, Lawrence, Linda, and Leana. Great Grandchildren: Keyon, Khylie, Hailey, Damien, Alex, Mario Jr., Armando Jr., Larissa, and Sofia. Sisters Mary Noriega, and Fina Arias. Numerous nieces and nephews and Best friend Barbara. Clara was preceded in death by her Father Cruz Garcia Sr, Mother Pilar Brito Garcia and first Husband Armando "Pachi" Altamirano, Daughter Rachel, Brothers Cruz Jr. "Gordy", Steve "Kiki" Garcia and Sisters Henrietta "Keta" Santos, Yolanda " P-Wee" Martinez, and Gloria "Pelona" Estrada-Perez. Services are being Entrusted to the care of: Tradition Cemetery 562 S. "I" St., San Bernardino, California Tel: (909) 383-1560/ Get Directions Funeral Services for Clara Maestas Family and Friends will be held on Wednesday, February 17, 2016 at 5:00 pm Viewing (2-4 pm) for Immediate Family and from (4-9pm) is for Family and Friends The Family Wishes to Thank all of those who sent their Thoughts and Prayers & Condolences at this difficult time and Thank You Everyone who donated money. Clara will Truly Be Missed by Her Family and Friends. An open potluck will be held after the Services (9pm) France's House 1555 Villa Ct. Highland, CA 92346 For more information contact Frances (909) 567-7000

Clara Maestas at the age of 62 went home to be with Lord on January 30, 2016 in San Bernardino, California surrounded by her Love Ones. Clara Brito Garcia was born July 12, 1953 in Oxnard, California to the late Cruz Garcia Sr and Pilar Brito... View Obituary & Service Information

The family of Clara B. Maestas created this Life Tributes page to make it easy to share your memories.

Clara Maestas at the age of 62 went home to be with Lord on January...

Send flowers to the Maestas family.