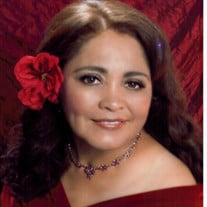 In Loving Memory of Julie Ann Contreras Julie Ann Contreras, 59 passed away August 18th, 2015 at Kindred Hospital in Rancho Cucamonga. She was born on June 22nd, 1956 in Riverside, CA to Daniel Contreras and Frances Ramirez. Julie grew up in the Riverside neighborhood of Casa Blanca and she resided in the city of Colton for 35 years. She received her high school diploma from Washington Adult School in Colton and she attended San Bernardino Valley College where she received her AA. She then went on to obtain her BS and teaching credentials from Cal State San Bernardino. Through out her career, she worked as a GED teacher, she volunteered as an ESL tutor, and she volunteered at Colton public library as a tutor for kids in the after school program. In her free time, she taught a Sunday school class for youth in a local church and throughout her life, she was also a tutor to numerous children and adults in need. She was a member of the Church of God of Prophecy in Colton for many years. She is survived by her mother, Frances Contreras of Colton; her daughter, Kimberly Ahumada of Colton; two sisters, Diane and Debbie Contreras of Riverside; four brothers, Joe Conttreras, Steve (Monica) Briones of Victorville, Marcos Lozano and Albert Castro of Colton. She had 5 grandchildren, Bianca, Alexis, Danni Florez, Christopher and Nicholas Ahumada Bowden; 3 great-grandchildren, Rayleen, Daniel, and Layla Ahumada Herrera, all of Colton. She had 15 nieces and 9 nephews, as well as many great-nieces and nephews. She also had numerous cousins, aunts, uncles and friends. She is preceded in death by her Son, Daniel Ahumada Jr.; father, Daniel Contreras; baby brother, Benny Briones as well as her best friend/companion/caretaker, Maria Ventura. Services will take place at Preciado Funeral Home in San Bernardino on Thursday, August 27th, 2015 at 10 a.m. and she will be laid to rest with her son, at Hermosa Cemetery in Colton, starting at 1:30pm.

The family of Julie Ann Contreras created this Life Tributes page to make it easy to share your memories.

Send flowers to the Contreras family.