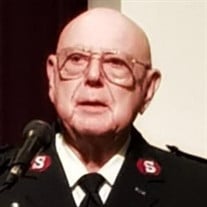 Russell Ralph Fritz passed away in his sleep on June 8th, 2021 at his home in San Bernardino, CA. He was born January 27th, 1942 in Van Nuys, CA. He was 79 years old. Russell is the oldest child of Russell Roland Fritz and Betty Margaret (Howell) Fritz, growing up in a close-knit Baptist family. He was an Eagle Scout and attended Birmingham Junior and Senior High School in Van Nuys, participating in extracurricular activities like swim team, track and choir. He joined the United States Army June 21st, 1960 and served for three years, stationed at home and abroad and earning many military honors and awards: Decorated Legion of Merit, Bronze Star, two Purple Hearts and even served with the French Foreign Legion. While stationed in Harrogate in North Yorkshire England, he met his wife of 58 years at the Salvation Army church and was married there in 1963. He became a Salvation Army officer in 1968 and retired with many honors and awards in 2007. In the 1970's he attended Florida State University as well as various Christian schools studying Sociology and Theology. In 1985 his family was stationed in Kingston, Jamaica for relief and charity work with the Salvation Army. For many years before and after retirement, he was on-call to assist local law enforcement as a Chaplain, disaster and relief aid worker, including riding along on missions with the San Bernardino Police Department. Russell's family moved to San Bernardino in 2007 where he and his wife Jacqueline retired from the church, and he continued a lifelong obsession with collecting interesting historical artifacts. He loved to read books and listen to a wide range of music. He was a very active outdoorsman all his life, enjoying such activities as camping, fishing, hiking, river rafting, parachuting with his daughter April, and even hunting for Bigfoot in the Northwestern U.S. during his honeymoon! He lived like every day and every errand could be a grand adventure. He is survived by his wife Jacqueline Fritz; his daughter April Fritz; his granddaughters Christine Penn and Emmili Penn; his two brothers Ron and John Fritz (niece Julie and nephew Daniel Fritz). Russell has joined many family, friends, colleagues and comrades in heaven, but most of all his parents Russell and Betty and baby daughter, Jacqueline Fritz. He will be laid to rest with multiple generations of his family in a private ceremony at Oakwood Memorial Park in Chatsworth, CA "It was a stunningly beautiful sunny day. The sun made everything sparkle. The blacktop road was not black but was alive with sparkling silver and gold droplets. The sidewalk and the grass blades all sparkled like diamonds." ~Russell Fritz

Russell Ralph Fritz passed away in his sleep on June 8th, 2021 at his home in San Bernardino, CA. He was born January 27th, 1942 in Van Nuys, CA. He was 79 years old. Russell is the oldest child of Russell Roland Fritz and Betty Margaret (Howell)... View Obituary & Service Information

The family of Russell Ralph Fritz created this Life Tributes page to make it easy to share your memories.

Send flowers to the Fritz family.