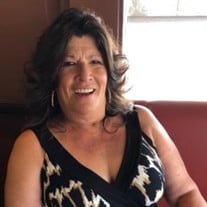 Toni Renee Torrez died of colon cancer at the age of 61. Her daughter Danielle cared for her in her home in Fontana until she passed away on September 6th, 2020. Toni was born in San Bernardino at St. Bernardine’s Hospital on September 22, 1958 to her hard working dad, Luis Ibarra Torrez, and beautiful mom, Calista Rosanna Torrez. Toni was a free spirit that traveled the country but resided with her loving son, Richard, for the past year. Toni was a member of the Fraternal Order of Eagles in San Bernardino. Ms. Torrez served as the Worthy Conductor for the Mighty 506 in 2018. She was also a member of the Highland Senior Center where she participated in a phone pal program that made calls to homebound seniors and was nominated as a candidate for Volunteer of the Year. From 2015 - 2017, Ms. Torrez was a valued volunteer at Poplar Elementary School in the Fontana Unified School District as well as a member of the PTA. She would organize the parent volunteers in the classroom and implement fun educational activities for the students. She was awarded “Volunteer of the Quarter," and “Volunteer of the Year" on several occasions. Toni Torrez was an incredibly beautiful woman that had the biggest heart. She had the brightest smile and a laugh that made this world a little better every second. She would touch your heart and fill your stomach with her delicious cooking. Toni had a story for every situation, and in each one, you learned a little bit more about her and about the hundreds of friends she had. She never judged you on your past or present, and she accepted you no matter what. This is just a fragment of how extraordinary she was. Toni had four loving sisters, Nancy, Ramona, Nena, Rosanna along with her only brother, Louie. She was surrounded by the love of her five children Amber, Richard, Danielle, Shawn and Raylene. She had seven wonderful grandchildren Alyza, Scarlet, Nick, Robert, Ruby, Adam, and Lyla as well as many nieces and nephews whom she loved deeply. Toni leaves behind many close friends. Toni was preceded in death by her father Luis I. Torrez, Steven Norman Dietrich May 5th, 1997, father to Danielle and Shawn, and Ruben Richard Rodriguez July 21st, 2010, father to Richard and Amber. A celebration of Toni’s life will be held Monday September 28, 2020 at Preciado Funeral Home,9:30-11:00 AM viewing/visiting, 11:00-12:00 PM Rosary and Memorial Services. The Interment at Montecito Memorial Park, 1:00 PM. Followed by a reception at the Fraternal Order of Eagles Aerie 506, at 3:00 PM . Friends, family, and others who were touched by Toni, are invited to attend.

Toni Renee Torrez died of colon cancer at the age of 61. Her daughter Danielle cared for her in her home in Fontana until she passed away on September 6th, 2020. Toni was born in San Bernardino at St. Bernardine&#8217;s Hospital on September... View Obituary & Service Information

The family of Toni Renee Torrez created this Life Tributes page to make it easy to share your memories.

Toni Renee Torrez died of colon cancer at the age of 61. Her...

Send flowers to the Torrez family.