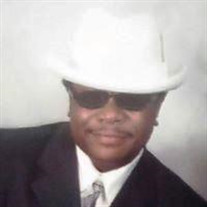 William D. Scott Sr. (Scotty) was born on April 27, 1950. It was a hot 93 degrees day in Tucson, Arizona when he masterly took his place in the family as the 11th child of Richard G. Scott and Evelyn J. Scott. Scotty was always a business man. Even as a child he claimed to be the CEO of his shoe shining business which landed him and his brother, Daniel a full page write up in the Tucson Daily Newspaper. With the fame from the newspaper story, he increased business and gained many clients. As a youth, Scotty enjoyed school, sports, music and dancing. He was a star football player at Pueblo High School where he brought the team to victory many times. Scotty graduated from Pueblo High School and attended Tucson Pima Community College. Scotty later relocated to California and began his career as a correctional officer with California Department of Corrections and Rehabilitation at California Institution for Men on January 1, 1975. He transferred to California Rehabilitation Center on December 9, 1975. Scotty was a member of the Honor Guards Association while employed with this department. After 32 years of dedicated service, he retired from CDCR on December 31, 2007. During his career with the Department of Corrections, Scotty took a leadership role in the Association of Black Correctional Workers, serving as the Vice President of the Prison Valley Chapter. His public relations and event planning skills led to tremendous chapter growth. Scotty’s involvement let to the restart of the "Youth on the Move" increased annual banquets, events. He also managed the hospitality suite which was the highlight of all ABCW conferences. As a result of Scotty’s energetics leadership, the Prison Valley Chapter became the ABCW’s premier chapter. Scotty was a loyal friend who would go to out his way for the people he loved. He would like us to continue the fun times, the parties, Super Bowl, BBQ’s in the park, concerts; and family and friends getting together for fun and happy times. As we all know, Scotty was the life of the party and was a member of the Original Party Crew and Friends. William Scott passed away on Tuesday, November 25, 2014 To cherish his memories William leaves; his son, William Scott Jr.(Danielle) His daughter; Franchesca Scott, sisters and brothers; Marie Bills, Edna McGee (Sam), George Scott (Cheryl), Adeline Austin (Nelson), Alfred Scott (Yvonne), and Robert Scott (Cathy), grandchildren; Latechia Drake, Shabria Scott, Shayla Scott, Nakai Finley, Jumari Scott, Anionna Scott, and one great-grandson, Vaughn Proby, a host of nieces, nephews, cousins, relatives, family friends, friends, and loved ones While I’m gone to my resting place Weary no more, I’ve ran a good race Now I’m running through heave’s open door I’m resting in peace but my spirit lives evermore Thank you all for being here to celebrate the wonderful full life of Scotty “William D. Scott” Acknowledgement We would like to express our gratitude for all the love, support and prayers you have given us. Thank you for your prayers, which has increased our faith. Your words, which has encouraged our hearts; Your presence, which has given us arms to lean on. The thoughts of every card and expression of kindness and sympathy added a touch peace. Because of your caring and sharing, you have made our burden much lighter. Please continue to pray for us, and may God’s Blessing forever shine on each of you

William D. Scott Sr. (Scotty) was born on April 27, 1950. It was a hot 93 degrees day in Tucson, Arizona when he masterly took his place in the family as the 11th child of Richard G. Scott and Evelyn J. Scott. Scotty was always a business man.... View Obituary & Service Information

The family of William D. Scott created this Life Tributes page to make it easy to share your memories.

Send flowers to the Scott family.